The United States and its economic allies are under attack by a force unlike any they have ever faced. China and other emerging nations are competing for markets around the world using their own versions of capitalism—and, thus far, they are winning handily. One of the world's leading authorities on global business strategy describes how the "economic cold war" began, how it is being played out now, and how the West can change the course of events in its favor.

Strategic Capitalism calls for an end to the economic idealism that has dominated the national dialog. It also calls for a cold, hard focus on reality, which is this: government-managed capitalist systems consistently outmaneuver and outperform the traditional laissez-faire capitalism of the West.

With refreshing levels of thoroughness, knowledge, and detachment, D'Aveni describes the competitive landscape today. The world's best competitors—with China in the lead—have adopted elements of managed capitalism, in which government and businesses work together toward a single aim. China's objective is clear—to displace the United States as the world's economic leader by becoming the global rule maker.

If the West does not act soon, it stands to lose everything it holds dear: financial prosperity, economic freedom, geopolitical power, national security, and even democratic values.

This is disruptive innovation on a global scale. But instead of companies using breakthrough products and brands to gain market share, nations are devising "game-changing" economic systems to seize influence over—and beyond—the global economy.

Bleak as the situation may be, D'Aveni contends that the West can reverse the trends currently tilting the global balance of power. In order to meet the challenges of the future, America must revisit long-held assumptions about economics and economies, seriously consider radical alternative policies, and embrace the concept of Strategic Capitalism.

Purchase at any of these resellers 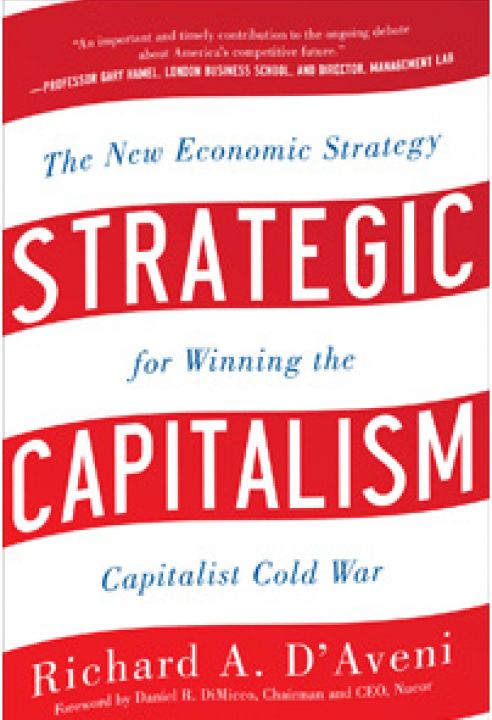 “An important and timely contribution to the ongoing debate about America’s competitive future.”